Nowadays an old technology of dispatching services work remained at the majority of Ukrainian enterprises where motor or railway transport is used for technological transportations. Control of technological vehicles (V) is performed by dispatcher or operators in manually. This essentially complicates implementation of continuous operating control of all V movement especially at night.

Further data processing is organized in such way that transportation data, as a rule, is fixed on paper and then processed in enterprise computer center. After processing and main reports preparation data are transferred to customers with a certain time delay. Such old technology doesn’t represent on-line data about process of raw materials (production) transportation.

Important features at railway transport dispatching control is rather stable layout of unloading/unloading points (actually railway stations and stages), existence of special restrictions of access roads quantity, trains motion speed, etc. In a view of the aforesaid it is possible to solve more simply problems of vehicles movement visualization by means of special diagrams (patterns, as it is shown lower in the picture), but at the same time it is necessary to take into account listed restrictions. 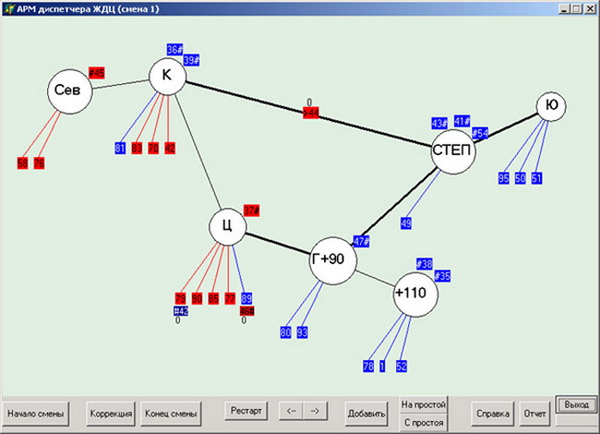 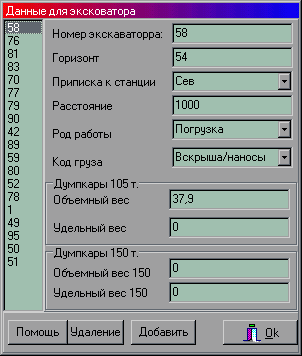 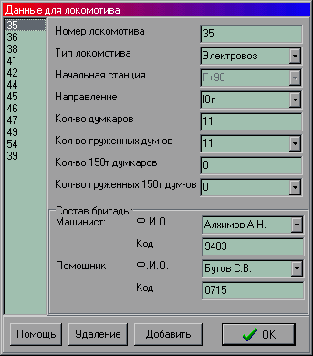 Such stages as shift beginning and end are completely automated. In the system they are performed in a batch mode (registration of data about quantitative composition, loading places, replaceable tasks of locomotives and excavators, changes of location and crews). 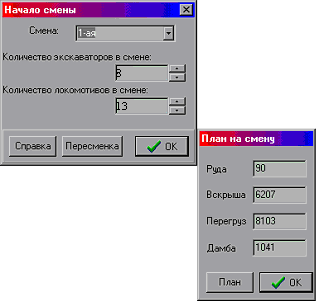 Then visualization of locomotives movement from loading point to unloading one is performed on dispatcher’s monitor throughout a shift. Calculation of distances and time of train movement in the system is carried out completely automatically. At the same time, control of allowed train and locomotives idle time at stations, stages, loading-unloading points is carried out. In case of allowed idle time exceeding dispatcher is warned on the monitor and reported about idle object and its location.

During and after shift it is possible to make automatic reporting with possibility of editing, printout and data transfer within local computer network or standard means of remote access (modem, electronic mail) in the system. 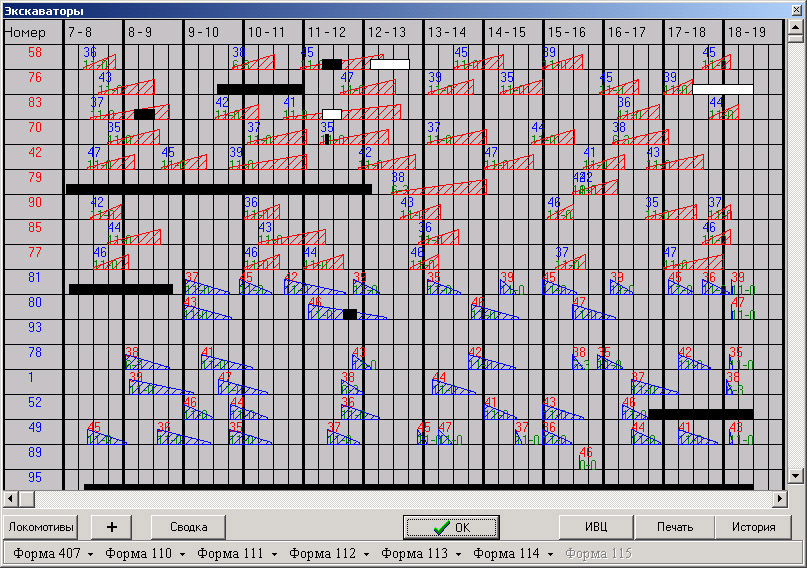 Data exchange with other subdivisions of the enterprise (for example, computer center, enterprise management) can be performed within corporate information network or, if it is absent, in remote access mode on the basis of modem connection.

Extra facilities of the system:

It is known that technological and other cargo transportations are typical for the majority of industrial enterprises to a greater or lesser extent. If at the same time a lot of vehicles are involved in operation, transport services dispatchers should solve different optimization problems almost constantly. For example, the most typical problem is that in conditions of vehicles stimulated idle times (failures) it is necessary to redistribute freight traffics and withstand specified replaceable indexes according to the plan.

Taking into account these requirements KRYVBASACADEMINVEST has developed system of technological transport dispatching control. This system is intended for solution of visualization tasks, control and management of motor vehicles (for example, dump trucks in the open-pit, implementation of large-scale construction work, roadwork, etc.). 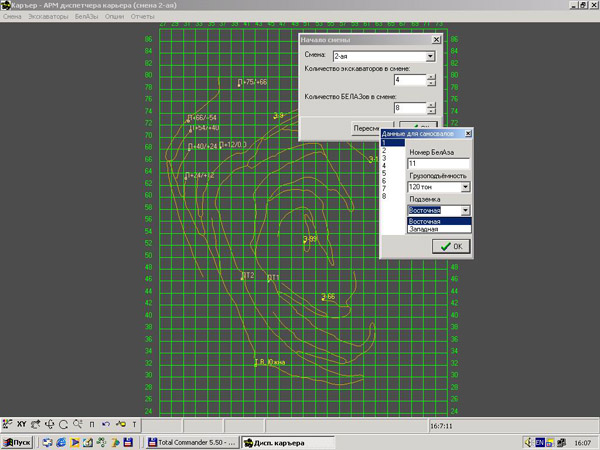 Depending on various event in the system (“Shift beginning”, “Shift end”, vehicle arrival to loading/unloading points), necessary information is input and certain direction of motor traffic is chosen. All vehicle movements are at once displayed in real digital area map. 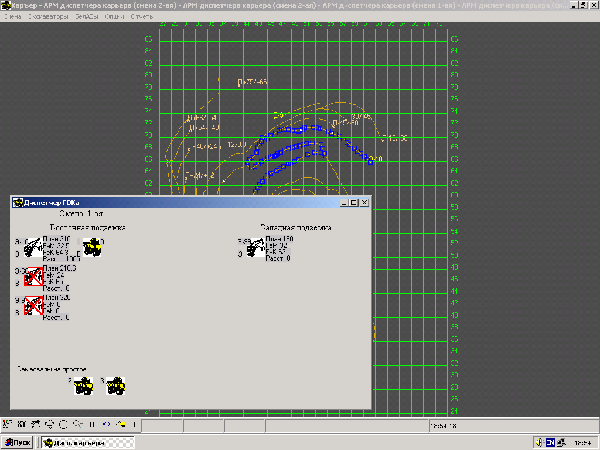 Control is performed on-line. There are a lot of possibilities for automated choice of the most optimum route, according to existent road network. This choice is possible on the basis of the following criteria use:

In the system there is a connection via corporate information network with other information systems of the enterprise to receive and transmit necessary information about shift tasks, results of equipment and staff work. 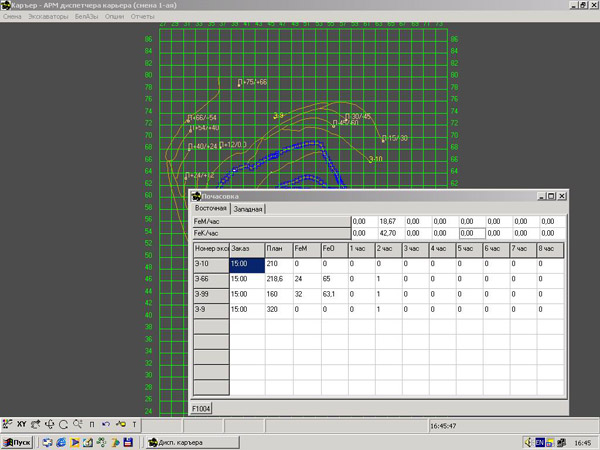 Main information users in the system are: dispatching center (DC), functional departments, services and technical control departments (TCD), transport workshops, other engineering services of the enterprise. Dispatching center (DC) represents information about actual condition of all vehicles, actual vehicles location in the area, volumes of transported raw materials, their planned and real quality. Functional and technical control departments (TCD) need information about volumes of extracted and transported raw materials, their quality. Transport workshops receive from dispatcher data about volumes of transported cargo as well as statistics about on-line exploitation of equipment and vehicles that is necessary for idle time analysis.

Important peculiarity of this system is use of special developed back-off technology. This technology allows performing smooth recovery of initial data in case of incidents (electric power miss, OS stick and unskilled work of staff).

It is necessary to notice that the most efficient work of the system will be provided if vehicles are equipped with location sensors like GPS, sensors of fuel consumption, loading and possible transmission of on-line data.

Thus, our development and exploitation experience of automated systems of technological transport dispatching control shows that such developments are quite modern solutions in this field and they lead to increase of transport departments work efficiency within industrial enterprises.

member of International Academy of Computer Science and Systems